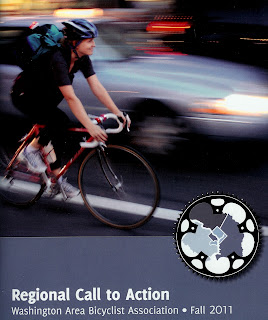 Last week, at its regional summit on bicycling advocacy, the Washington Area Bicyclist Association (WABA) previewed its Regional Call to Action for better bicycling in the area. The Call to Action focuses on making bicycling a viable form of transportation for a much broader segment of the population. Currently, approximately 3% of DC residents bike to work according to the most recent American Community Survey. WABA’s goal is to continue to improve cycling conditions for those who already bike, but to make improvements in a way that will induce the 60% of people who say that they are interested in biking, but concerned about some element, to give cycling a try. “We need to think bigger and think broader about making bicycling appealing to the average person who simply wants to get where he or she is going in a convenient, economical way,” says WABA Executive Director Shane Farthing. “For bicycling to become and remain a viable transportation option for the average person, it needs to be usable, connected, safe, and protected. While biking is great fun and great sport, it is also–in many parts of our region–the fastest and easiest and cheapest way to simply run an errand or make a short trip. In those parts of our region that lag behind, where conditions are not what they need to be for the average person to bike comfortably, we must accept the challenge and bring about improvements.” WABA’s last Call to Action, in 2000, was directed to the District of Columbia government, and focused energy on the improvement of District bicycling facilities. In that 11 year period, the number of miles of bike lanes has jumped from less than three to more than fifty, the District Department of Transportation has built a reputable bike program, and bicycle mode share in DC has tripled. This 2011 Regional Call to Action is directed to the bicycling community, encouraging every cyclist to get involved in the growth of cycling. The full Regional Call to Action document is available for download at here: 2011 Call to Action