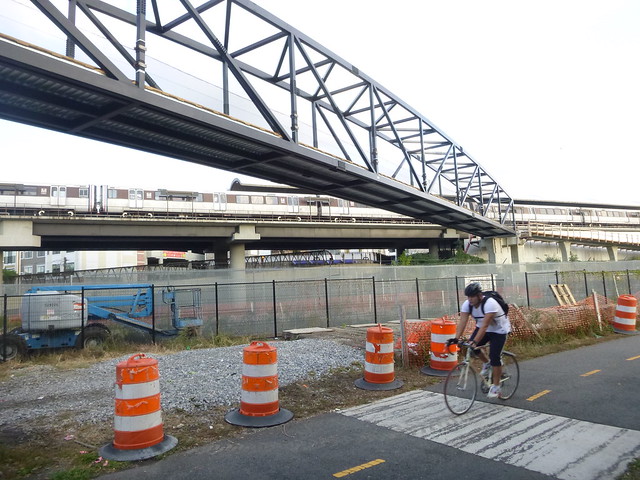 Regular riders of the Met Branch Trail have probably noticed that the under-construction bridge between the trail and the Rhode Island Ave Metro suddenly looks a lot more like a bridge. The steel bridge span was hoisted into place in early hours of Wednesday morning. DDOT contractors used two large cranes to lift the pre-assembled span into position, bringing this project one major step closer to completion. When finished, the bridge will connect the Edgewood neighborhood and Met Branch Trail over the railroad tracks directly to the Rhode Island Ave Metro Station. Here’s a time lapse video of the span being moved into position:
Post by Sally Hobaugh.
Read more about this project in both the WAMU and DCist coverage. The bridge project is loaded in the DDOT Dashboard so you can follow the progress along as you wait for it to be finished. But you don’t have to wait much longer, DDOT estimates the bridge will be fully finished and open to the public by the end of the year or January 2015 at the very latest.

New bridge at the NoMa station