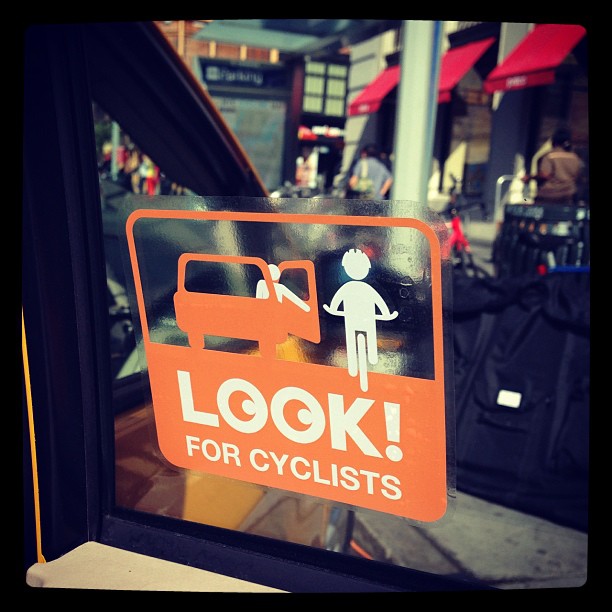 Written by Women & Bicycles Community Member Lucy Aguirre A victory for all people who bike! In an effort to prevent bicyclists from getting “doored”, the DC Taxicab Commission  will require taxicabs to display “LOOK FOR CYCLISTS” stickers. I’ve heard too many stories about bicyclists getting “doored”. The first story I heard involved a roommate who was biking home from work, cruising safely in the bike lane until a taxicab suddenly stopped at a green light. A passenger opened the rear right door in the path of my unsuspecting friend, flinging her and her new Trek road bike straight into the pavement. Luckily she wasn’t seriously hurt; however, she was traumatized in other ways. “My desire and love of bicycling was crushed,” she said. “It destroyed my confidence and I was scared to bike again. Although that was five years ago, I still feel a little bit of that fear.” It is simply unacceptable that inattentive drivers and passengers have injured so many bicyclists with their car door. Opening a car door into any moving traffic is illegal and very dangerous for vulnerable road users. Bicyclists are often unable to stop fast enough to avoid a crash, especially when doored from the side. Dan Connor was doored by a NYC taxicab. The video of crash went viral in 2014. Photo credit: Dan Connor

This is not an isolated problem. Several bicyclists in New York City were doored and killed, leading the city government to action. The NYC Taxi & Limousine Commission now requires “Look for Cyclists” stickers in taxicabs in an effort to prevent such incidents. After the latest DC dooring incident was reported to WABA’s Women & Bicycles group, I was compelled to advocate for “Look for Cyclists” stickers for taxis in DC too. While the timeline for design and installation of the new safety stickers is not yet finalized, we hope you see them in a DC taxicab soon. Thank you to DC Councilmember Mary Cheh and DC Taxicab Commission Chairman Eric Rogers for recognizing this public safety issue and rapidly responding to implement this simple solution. Updated May 28th to clarify that DC Taxicab commission did not approve a new rule mandating stickers in taxicabs. The warning signs are part of an update to signage in taxicabs.