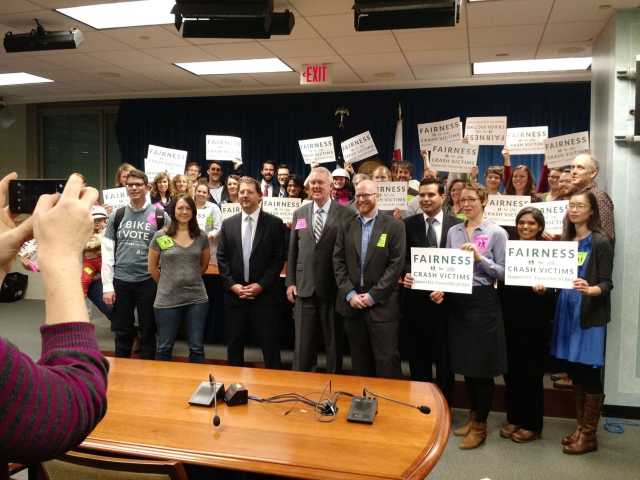 Big news! We have heard from Councilmember McDuffie and Judiciary Committee staff that they plan to bring the Motor Vehicle Collision Recovery Act of 2015 (B21-0004) to markup, this Thursday. The doctrine of contributory negligence is a legal dinosaur. This unfair legal standard is used to deny a bicyclist or pedestrian access to compensation for medical bills and property damage suffered when a negligent driver inflicts injuries on a less-negligent road user.  This doctrine unfairly compounds legal vulnerability upon physical injury and limits bicyclists access to justice. When a bicyclist or pedestrian is involved in crash with a driver, he or she should be able to focus on recovering from injuries without worrying that medical and property damage claims will be denied due to an outdated legal doctrine.

The District of Columbia is a national outlier, as it is one of only five states that still use contributory negligence to allocate fault. The vast majority of states have updated their negligence standard to a fairer system. WABA has been advocating for reform of this antiquated law since early 2014. The bill before the Judiciary Committee would change the law so that if a bicyclist or pedestrian is less than 50% at fault for the crash, he or she would not be automatically barred from recovery. Passing this law will give people a chance at having their expensive medical bills and damaged property covered. The current version of the bill represents a good compromise between many powerful stakeholders and we hope it will pass out of committee without any changes that would jeopardize the widespread support it enjoyed when it was first introduced last January. Click here to tell your Councilmember that you support passage of this bill without amendment, to give bicyclists a fair chance at justice after a crash. The Council of the District of Columbia’s legislative session is in full swing with four bills relevant to bicycling. Here are brief summaries of each bill and links to the full legislative language. We will be tracking the progress as these bill move forward (or don’t). WABA will give periodic updates on bills via our blog (waba.org/blog–you’re reading it right now!). We will also be sending out targeted action alerts to our members and supporters who live in the district. Sign-up for email updates and action alerts here.
Despite recent forward progress on the “Motor Vehicle Recovery Act of 2015,” the D.C. Council Committee on the Judiciary is delaying work on the bill until the fall. Last week, we announced the bill would have a markup hearing before the Council’s summer recess, but today, the Committee on the Judiciary’s mark-up hearing agenda did not include it. The bill will have to wait until the fall when the Council returns from recess. The Judiciary Committee cited other remaining business before the committee as the reason for the delay. While tight schedules are understandable, delaying this bill will directly impact hundreds of District residents over the next few months. There at least 3-4 crashes every day involving a pedestrian or bicyclist in D.C. Many of these injured victims will be denied recovery of damages and medical expenses because of the current law. The “Motor Vehicle Recovery Act of 2015” will abolish the unfair and out-of-date negligence standard that allows insurance companies to deny injured victim’s claims after a crash with a driver. We are disappointed to see progress on this important piece of legislation delayed until September. Councilmember Kenyan McDuffie (Ward 5 – D) is the chair of the Judiciary Committee. If you wish to express your opinion about the delay of this bill, please send him an email or call his office at (202) 724-8028. Learn more about this issue and WABA’s campaign to make the law fair for vulnerable road users involved in crashes Councilmember Mary Cheh (Ward 3) introduced a bill in the D.C. Council to improve access to compensation for crash victims. Under current D.C. law, injured bicyclists and pedestrians can be completely denied compensation after a crash with a motor vehicle even if they were minimally negligent. In 2014,  Councilmember David Grosso (At-Large) introduced a similar bill, but it was ultimately tabled. The Motor Vehicle Collision Recovery Act of 2015 addresses the same underlying issue of inappropriate denial of compensation to minimally negligent bicyclists, but with slightly different mechanics. Under the proposed bill, contributory negligence could not be used to deny coverage to a bicyclist or pedestrian who was 50% or less responsible for his or her own injuries. When the bill is available online, we’ll provide deeper analysis and a link to the draft language. For more background about the issue of contributory negligence for crash victims, you can learn more by reading our blog post responding to the 10 most common question. The bill was co-introduced by Councilmembers Charles Allen (Ward 6), Jack Evans (Ward 2), David Grosso (At-Large), Anita Bonds (At-Large) and co-sponsored by Yvette Alexander (Ward 7). The legislation was referred to the Committee on the Judiciary, chaired by Councilmember Kenyan McDuffie (Ward 5). The Committee must hold a public hearing on the bill and a public mark-up meeting. If the bill were to successfully make it out of committee, the full D.C. Council would then weigh in. As the bill moves through the legislative process, we will provide updates here on the WABA Blog and our campaign page. You can also sign-up for email updates about this campaigns and we’ll be sure to alert you when action is needed. Thank you to Councilmember Cheh and today’s co-sponsors and co-introducers for moving this important legislation.

Today, D.C. Council Committee on the Judiciary and Public Safety tabled a proposed bill to improve access to compensation for crash victim–effectively killing it for this legislative session. Mary Cheh (Ward 3) introduced the motion to table. Councilmember Evans (Ward 2) and Chairman Mendelson voted to table the bill. Councilmember Wells (Ward 6) voted against the motion. The “Bicycle and Motor Vehicle Collision Recovery Amendment Act of 2014” (Bill 20-844) was introduced by Councilmember Grosso, Wells and Cheh in July to provide relief to vulnerable roadway users whose claims are inappropriately denied by insurers, and who cannot secure representation in the courts due to the economic effect of the liability standard. We are deeply disappointed that the economic concerns of the insurance industry and the D.C. Trial Lawyers Association derailed progress on a bill that would have meaningfully helped hundreds of crash victims receive the recovery they are fairly due for injuries resulting from another party’s negligence. We will continue to work to resolve this systemic problem.

Today, the Committee on the Judiciary and Public Safety held a legislative mark-up session on a number of bills, including the Bill 20-884 “Vulnerable User Recovery Act of 2014”. The Committee voted to postpone mark-up until next Wednesday, November 12th to allow all involved parties one last opportunity to craft a bill that meets the needs of vulnerable roadway users and the concerns of other stakeholders in the legal community. Councilmembers Jack Evan, Mary Cheh, Anita Bonds, Tommy Wells and David Grosso (not a member of Judiciary Committee) were in attendance at this morning’s mark-up. Councilmember Tommy Wells and David Gross with WABA and All Walks DC held a joint press conference and rally in support of the legislation before the DC Council. The bill, if passed, would move the District to a fairer negligence standard to enable crash victims to collect compensation from driver’s insurance. Yesterday’s press conference was attended by dozens of local residents calling on the DC Council to move the bill forward to protect the most vulnerable road users. Following votes from next week’s mark-up, WABA will post the vote results and a legislative scorecard online. You can learn more about the scorecard here and more about WABA’s campaign to bring fairness for crash victims. As we all wait until next week’s vote, take some time to read the press coverage from yesterday online here, here, here, here, here , here, here and here. Please also take a moment to contact your Councilmember to ask for their support of the bill.

November 5th Update: Due to weather concerns, the location has change to Room 123 inside the Wilson Building. The press conference will still be held at 10 am. Join DC Councilmember Tommy Wells, DC Councilmember David Grosso, WABA and All Walks DC on the front steps of the John A. Wilson Building for a press conference and rally in support of legislation to exempt bicyclists from the harsh and unfair contributory negligence standard. You can learn more about our campaign here and read more about this unfair law here, here and here. At the press conference, WABA will introduce our legislative scorecard for this bill ahead of mark-up on Friday. Learn more about the scorecard here. What: Joint Press Conference and Rally Who: DC Councilmember Tommy Wells, DC Councilmember David Grosso, Washington Area Bicyclist Association (WABA), All Walks DC. Date: Thursday, November 6, 2014 Time: 10:00am Where: John A. Wilson Building, Room 123, 1350 Pennsylvania Avenue, NW, Washington, DC 20004 Sign up on Facebook that you are planning to attend. Can’t make the press conference? Please email, visit or call your Councilmembers and ask them to support the Bicycle and Motor Vehicle Collision Recovery Amendment Act of 2014 (B20-884).

As many of you know, WABA is working hard to change the contributory negligence doctrine in DC. We have been publicly pushing for this change for years because of the negative effects the doctrine has on the District’s cyclists. Hundreds of you emailed your Councilmembers to show support for a bill that would change the doctrine to the fairer comparative negligence. However, the insurance industry and others oppose the bill, and have sent a swarm of lobbyists to work the Wilson Building and sway the votes of our elected officials. So, it’s time to publicly hold those Councilmembers accountable for their votes and show everyone which officials use their power to support people who bike, and which officials bow to insurance industry lobbyists. The Scoring System We view it as our responsibility to educate our members and the public on  key votes by elected officials that affect cyclists in the District.* On key bills affecting bicyclists, we will score each legislator’s Yes/No vote on a 0-100 scale. A vote in support of the bicycling position will receive a score of 100. A vote against the interest of bicycling will receive a score of 0. Individual votes will be averaged, and the legislator assigned the appropriate letter grade based on that score, using a quintile system. (So, 0-20 is F, 21-40 is D, 41-60 is C, 61-80 is B, and 81-100 is A.) Results of scored votes will be shared with all DC members and supporters via email once the vote is complete, and maintained on the WABA website, both on the homepage and in the “Resources” section. Scoring Votes on B20-0884, The Bicycle and Motor Vehicle Collision Recovery Amendment Act of 2014  When over 600 DC residents email their legislators on an issue this important to crash victims and all bicyclists, we need those legislators to listen to those constituents–not to the paid lobbyists protecting their industry’s financial interests at the expense of justice. With only a handful of legislative days left in this Council session, let’s find out who’s listening to whom and make our officials accountable for their decisions that directly affect our safety. A vote in favor of the bill will receive a score of 100. A vote against the bill, or a procedural vote that would have the effect of delaying the bill past the present Council session (causing it to fail without voting against it) will receive a score of zero. We will release the initial report card to members, supporters, and the public–based on votes on B20-0884–the day after a vote is taken. As the Council votes on other relevant legislation, we well include those votes on the scorecard as well. If you haven’t yet, write your councilmembers today:

* We’re testing this advocacy tool in the District. If it proves effective, we’ll try adding our other jurisdictions.