Fairfax County currently does not have a bike master plan. And that’s not good. The proposed Bike Master Plan contains recommendations for developing a comprehensive bicycle network. It also includes guidelines for bike-friendly programs and policies. The plan vision is “Meeting the safety, access, and mobility needs of bicyclists today, while encouraging more people to bicycle in the future…making Fairfax County bicycle friendly and bicycle safe.” Without a master plan, Fairfax County Department of Transportation has fallen behind in implementing bicycling improvements. The Fairfax County Planning Commission will hold a public hearing on the county’s Bicycle Master Plan (Phase II) on Wednesday, October 1 at 8:15 p.m. There needs to be a strong showing by residents who support the plan. Please consider attending the public hearing to show your support for the plan. Details about the October 1st hearing can be found online here. You can sign up to testify at the Planning Commission using this form. The Board of Supervisors will hold a public hearing on October 28. Look for another WABA email alert prior to that hearing. We are also asking cyclists to sign the FABB Bicycle Master Plan petition urging the Planning Commission and Board of Supervisors to approve the plan. This petition is from the Fairfax Advocates for Better Bicycling, a sponsored project of the Washington Area Bicyclist Association

This entry is part of our Women & Bicycles blog series. Women & Bicycles is WABA’s outreach and encouragement initiative to build a stronger women’s bike community and get more women on bikes. These posts certainly aren’t exclusive to women, but they’re produced with and through the Women & Bicycles’ programming and staffing. Click here to learn more and get involved. 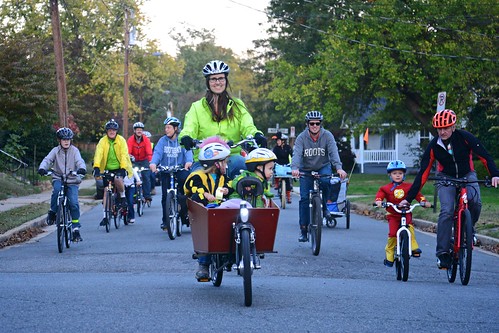 Kidical Mass groups are volunteer-run initiatives that organize family bike rides for all ages and all experience levels. The groups find flat (or flattest), short, and scenic routes that start or end with treats.These adorable and lively events help demystifying family biking and encourage more Americans to take it on for recreation and transportation. In just a few years we’ve seen a surge in these groups here in the D.C. metropolitan area. Find one closest to you, tell your friends, volunteer, start your own, join the ride! Since 2006 the Washington Area Bicyclist Association has educated over 26,000 children in the District of Columbia in safe bicycling and pedestrian habits.  In the Washington DC region, we are nearing our 100,000th student reached via our mobile bike rodeo trailers, in-service training sessions for teachers, hands on bike lessons, in class pedestrian and bicycle safety lessons, helmet giveaways, and more. All of this has been made possible through the federal Safe Routes to School program, which Rep. John Mica’s transportation plan eviscerates–along with other key funding mechanisms for bike-friendly projects. Contact your federal representative(s) today asking them to stand up for bike and pedestrian funding. In the last transportation bill the federal government made it a priority to encourage children to get active every day by walking or bicycling to school. They set up the Safe Routes to School program to provide encouragement, education and infrastructure improvements to eliminate many concerns parents have about walking to school.  In addition to the education component exemplified by WABA’s efforts,  this money pays for in-depth traffic studies around schools, the repair or installation of sidewalks, flashing traffic beacons, traffic calming around schools, raised crosswalks, pedestrian safety signs as well as hundreds of other measures all geared at making it safer and easier for children to walk or bicycle to school, like they used to decades ago. Unfortunately, a new draft of the federal transportation bill released Thursday by Representative John Mica, Chair of the House Transportation Committee, cuts funding by 30% for all our nation’s transportation needs, and it lands a knock-out punch on the Safe Routes to School program by eliminating it entirely. All bike and pedestrian projects are essentially shut down thanks to this draft’s focus on auto-centric road projects and a mere suggestion, not a minimum baseline, that transportation dollars be spent on bike and pedestrian projects as set in the previous transportation bill. So now, in one fell swoop, Safe Routes to School, a successful, popular program, is out and car-centric policies are back. If you care about safe biking and walking, call or email your representatives in Congress today. And if you live in Maryland or Virginia, call an extra time on behalf of the many District-based WABA members and cyclists who have no voting representative to call.

CLICK HERE TO SEND A DIRECT EMAIL TO YOUR FEDERAL REPRESENTATIVES.

At last Friday’s Bicycle and Trail Advisory Group (BTAG) meeting, Fred Shaffer with M-NCPPC announced that Prince George’s County has won its first ever, large scale SRTS grant. Totaling a whopping $897,000 the money will be used to improve bicycling and walking routes around five schools: Glen Ridge, Oak Crest, Woodridge, Highland Park and Gray Elementary schools. A portion of the money will also be used for bicycle and pedestrian education in these lucky schools. Safe Routes to School is a federally funded program that provides money to do the little things to encourage bicycling or walking to school, like repair sidewalks, install flashing crosswalk beacons; and the big things, like pedestrian safety islands and multi-use trails that connect schools to their communities. Every state in the country has Safe Routes to School funds available through the federal transportation bill, there’s no local match required and the funds are made available through the state. If your child’s school hasn’t received any Safe Routes to School funding for educational programming or infrastructure improvements, you should be asking your elected representatives and school board, “why not?”