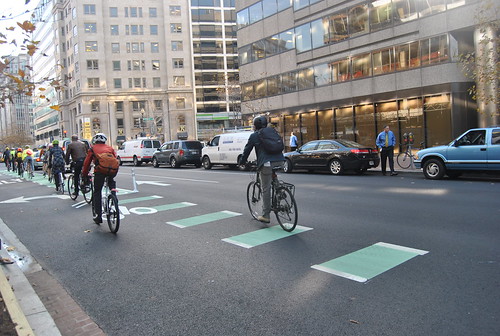 Build a protected bike lane and people will ride.

A well-connected network of protected bike lanes encourages people to ride their bikes. Nationwide, cities that have improved bike facilities have seen a significant increase in the number of people willing to leave their cars behind and commute by bike. According to the District Department of Transportation, after D.C. built protected bike lanes on 15th Street, Pennsylvania Avenue, and L and M Streets, its commuter community increased by 9,000 from 2007 to 2013. The 15th St protected bike lane in D.C. carries 300-400 bicyclists per hour during rush hours.

In nearly every instance, there is an inverse relationship between the number of people riding bikes and the number of crashes. A recent University of Colorado Denver study showed that when more than 200 bicyclist per hour ride through an intersection, the safety for riders increases dramatically. A safer street for biking is safer for walking and driving too!

Millennials, people in their 20s and 30s, are increasingly eschewing suburban living and long commutes for urban settings that are walkable and bikeable. For this population, real estate proximate to bike facilities is proving to be a significant draw. In fact, the population of college educated 25 and 34-year-olds in walkable neighborhoods has increased by 25% in the last decade. Moreover, walkable urban places (WalkUPs) are increasingly the desired character for a neighborhood for all demographic groups. The redesign of Arlington Road will help achieve this environment by acting as a transition to neighborhood streets for walking and biking.

Making a place more walkable and bikeable stimulates the economy. Cyclists are more likely to stop for a quick purchase along a bike route than individuals traveling by automobile. When a bike lane was added to San Francisco’s Mission District businesses noted. “When San Francisco reduced car lanes and installed bike lanes and wider sidewalks on Valencia Street in the Mission District, two-thirds of merchants said the increased levels of bicycling and walking improved business (a 60% increase in sales).”  Source: Protected Bike Lanes Mean Business.

Of 782 people (non-bicyclists) surveyed, 83% of residents around the area of the 15th St NW cycle track considered the new bike lane a valuable asset to their neighborhood according to a DDOT study (Source: DDOT Bicycle Facility Evaluation PDF). Switching to transit,  biking and walking results in an enormous cost savings and is great for the economy Imagine the money you’d save if you could eliminate the cost of gas, insurance and automotive maintenance. This green dividend would then free up dollars for dining out, entertainment, vacations and many other things. WABA’s advocacy is supported by your membership dollars. Join or donate to WABA today to help advance our advocacy work, including increasing the amount of physically separated bike infrastructure.