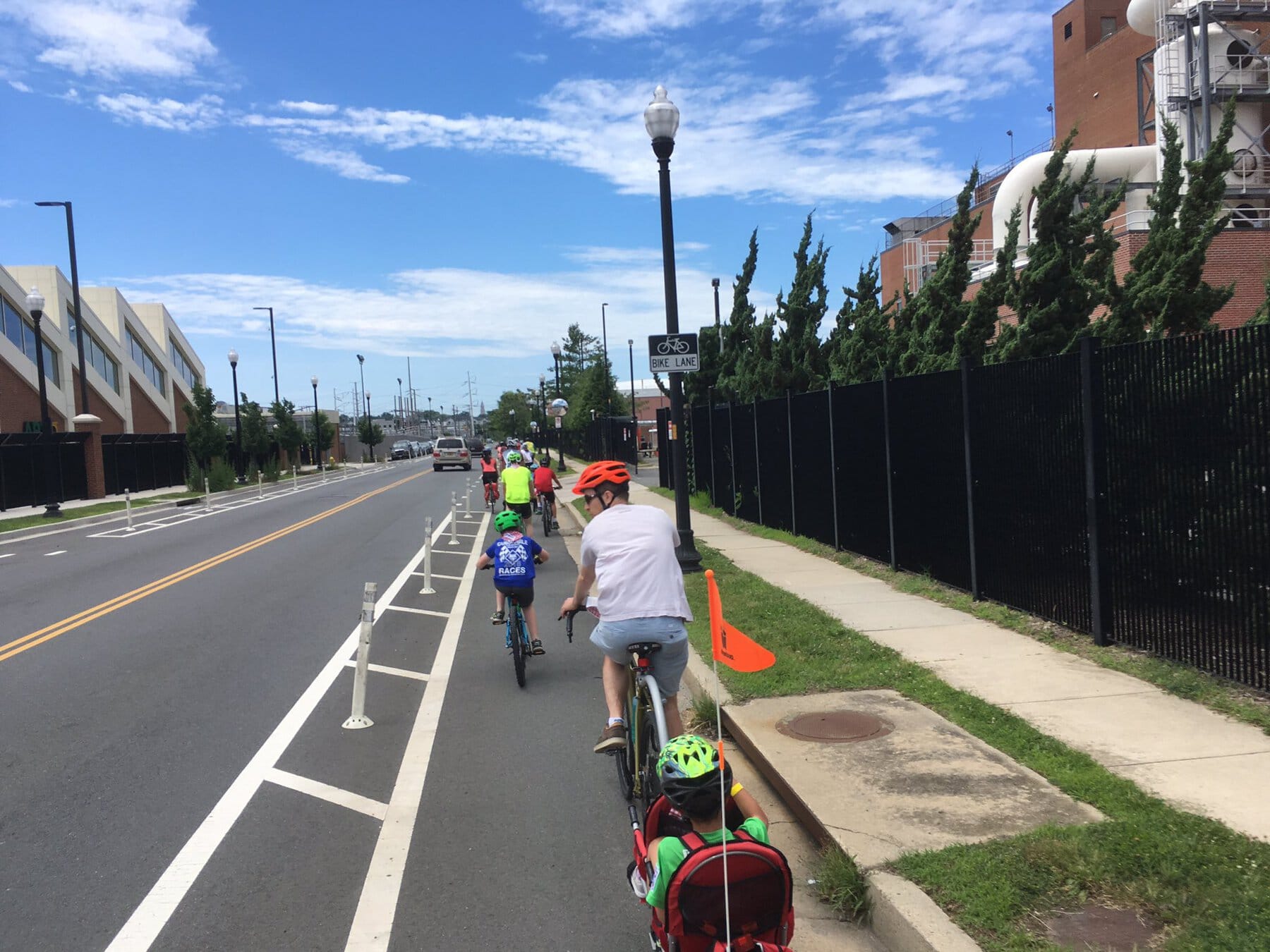 This entry is part of our Women & Bicycles blog series. Women & Bicycles is WABA’s outreach and encouragement initiative to build a stronger women’s bike community and get more women on bikes. These posts certainly aren’t exclusive to women, but they’re produced with 2 and through the Women & Bicycles’ programming and staffing. Click here to learn more and get involved. There’s a good chance the bike infrastructure we use today wasn’t around when you learned to ride a bike (and it probably wasn’t mentioned in your drivers’ ed course).  This week, we’d like to help you familiarize yourself with some different types of bike facilities out there. Sharrows are street markings that serve as reminders to road users that bicyclists have rights to the lanes on these routes—even though cyclists may, for the most part, legally ride in the road. Sharrows are often placed on routes that see more bike traffic or on streets that are too narrow for drivers to pass bicyclists safely as reminders. Bike lanes provide a dedicated space for bicyclists on the roadway. Without a lack of physical barriers, however, cyclists still must be wary of riding in the “door zone,” the 3 to 5 foot area along parked cars, double-parked vehicles, road debris, and turning vehicles. Parking in bike lanes is illegal in D.C., Maryland, and Virginia. Cycletracks are protected bike lanes. Some provide physical barriers from other road-users and effectively form an on-street bike path. Click here to check out 19 creative ways cities are protecting cycletracks. Yes, if you build it, they will come. But first, people need to know what you’ve built! Wayfinding encompasses things such as street signs placed throughout the region to direct bicyclists to trails, paths, and other amenities. Bike boxes give priority to bicyclists at intersections by providing a designated space to queue up in front of cars. Bike boxes improve the visibility of bicyclists and can help prevent right-hook collisions. Mixing zones are merging areas. Traffic that is turning at intersections must yield to bicyclists just like they would with another automobile and enter the mixing zone. Sometimes this means the vehicle may need to wait in the bike lane at the intersection before turning. This is perfectly fine as long as the driver yielded to bicyclists. Bike corrals are an efficient use of on-street bike parking. They transform a parking space or sidewalk area into bike parking. Portland just recently installed its 100th bike parking corral! How many have you spotted in our region?