Today FABB celebrated the publication of the Guide for Reviewing Public Road Design and Bicycling Accommodations for Virginia Bicycling Advocates. The guide was published earlier this year and this was an opportunity to thank many of the people who helped FABB produce it. The Alliance for Biking & Walking provided the funds for the guide and Carolyn Szczepanski of the Alliance was there to say a few words about the Advocacy Advance Grants and the work of the Alliance. Other speakers included Andy Clarke of the League of American Bicyclists , Shane Farthing of WABA, Stewart Schwartz of the Coalition for Smarter Growth, and Doug Miller of VDOT. VDOT staff provided invaluable help to FABB during production of the guide by describing in detail how VDOT projects are planned and constructed. Several staff attended the launch. Others present included Mark Blacknell of the Arlington Bicycle Advisory Committee, Angela Koch, Events and Advocacy Coordinator at Revolution Cycles, Zack Fields of Congressman Connolly’s office, Edythe Frankel,  Vienna Town Council, Susan Stillman of the Vienna Bicycle Advisory Committee, and several FABB members. 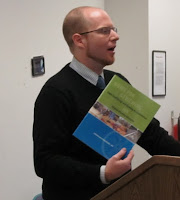 Linda Rapp designed the guide layout and color scheme, making an attractive and more easily understood publication. Kerie Hitt did a great job of editing. Fionnuala Quinn had the initial idea for the guide, initiated the grant application, and was the primary author. Bruce Wright, co-author, noted that Fairfax County has begun the bicycle master planning process that will provide a blueprint for future bicycle facilities in the county. Good things are happening in Fairfax and the Guide should help area cyclists get involved in the process of transforming Fairfax into a more bike-friendly place. Ironically, some of us had to drive to the event. It’s a sobering experience for those of us who usually get around by bike to experience a rainy rush hour. It took longer to get there by car (in some cases much longer) than by bike. Traffic on Maple Ave was backed for miles as were  many of the feeder streets. According to one of the VDOT folks present, maybe we’re on to something. 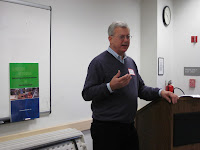