For the past year, Congresswoman Eleanor Holmes Norton has hosted quarterly community meetings to help DC residents better connect with representatives from the National Park Service. If you have questions or concerns about a national parkland in DC or how it is managed, this is a good opportunity to bring them up. In the past five years, NPS has made great strides to better accommodate bicycling and trails in and around DC’s national parkland, but we are far from done. Bring your ideas.

Congresswoman Norton’s district office is hosting a virtual town hall on the impact of the U.S. Capitol attack on D.C. residents, public spaces, and security

Who: All D.C. Residents

What: A virtual town hall on the impact of the U.S. Capitol attack on D.C. residents, public spaces, and security

Where: Please email norton.events@mail.house.gov to RSVP for the event and receive the Zoom link

This event is open to the public.

After more than three years working to fill a gap in Downtown DC’s protected bike lane network on Louisiana Ave, the project is moving forward. Better yet, preliminary plans are done and ready to share!

On Wednesday, October 24, Congresswoman Eleanor Holmes Norton is hosting a community meeting and panel discussion with the District Department of Transportation to introduce this project to the public and get feedback on current plans. This is our chance to stand up as a community and say “we want this project!” Will you join us?

Bringing this project to this point has not been easy. It has taken the combined will of neighborhood commissioners, councilmembers, members of Congress and hundreds of people like you. So join us on Wednesday to see the plan and keep the pressure up!

See you on Wednesday.

Support is growing quickly for a protected bike lane on Louisiana Avenue to fill a major gap in downtown DC’s low stress bike lane network. Since June, the District Department of Transportation (DDOT) and the Architect of the Capitol (AOC) have received requests from DC Councilmember Charles Allen, ANC 6C, and even members of the Congressional Bike Caucus, urging swift action and support for a protected bike lane on Louisiana Avenue between existing lanes on First Street NE and Pennsylvania Ave. Following these requests, DDOT and AOC staff have already conducted a preliminary site visit to explore possibilities.

Earlier this week, Congresswoman Eleanor Holmes Norton added her support in a letter to DDOT Director Dormsjo and Architect of the Capitol Stephen Ayers.

“A protected bike lane between Union Station and the U.S. Capitol Grounds on Louisiana Avenue would improve safety and provide a vital link between already existing bike lanes in the area,” she wrote. “Union Station and the U.S. Capitol are separated by multi-lane roadways with fast-moving traffic, which poses safety risks to the residents, workers, and visitors destined for Union Station, the U.S. Capitol, and points beyond. DDOT Has already constructed protected bike lanes on Pennsylvania Avenue NW and First Street NE and throughout the city. Filling in the missing link on Louisiana Avenue NE would help complete this network of bicycle lanes.” Read the full letter here.

We are grateful to have the support of Congresswoman Norton for a project with benefits for countless DC’s residents, workers, and visitors. More updates on this campaign as it progresses. Read more about the proposal here

As reported by DCist yesterday, the National Park Service responded to Eleanor Holmes Norton’s request for a progress report on the Rock Creek Park Trail. Per DCist:

In a letter Norton released today, Tara Morrison, Superintendent of Rock Creek Park, says an Environmental Assessment (EA) is currently with the Federal Highway Administration for approval. A Finding of No Significant Impact (or, delightfully, FONSI) document is expected to be signed by FHWA in the “near future” and NPS is currently drafting their own, which will also be reviewed by the District Department of Transportation. “Construction could begin on the project as early as Fiscal Year 2015,” the letter states. While any movement is welcome news, Greg Billing from the Washington Area Bicyclist Association says the pace thus far has been frustrating.

Read NPS’ full response here and the press release from Norton’s office below the jump. END_OF_DOCUMENT_TOKEN_TO_BE_REPLACED 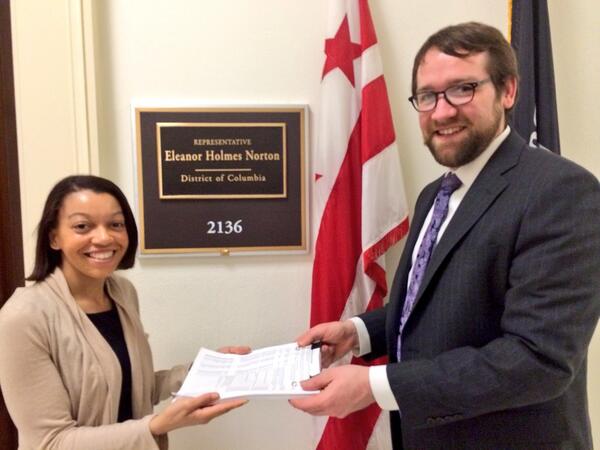 Yesterday, Tues., March 5, our Advocacy Coordinator, Greg Billing, delivered to D.C. Congresswoman Eleanor Holmes Norton’s a petition you and over 2,400 others signed, asking for improvements to the Rock Creek Park Trail. A lack of any attempt to improve the trail’s well-known egregious conditions drove WABA to demand immediate action from the National Park Service and District Department of Transportation last month. Del. Norton is now asking those agencies for a progress report.

We are grateful for Congresswomen Norton’s support of the campaign to fix the Rock Creek Park Trail. Read the full press release from her office below the jump. END_OF_DOCUMENT_TOKEN_TO_BE_REPLACED